The New Urbanism Film Festival will be in Dallas hosting 2 screenings of short films on the topics of Architecture & Urban Design.   The Festival, based in Los Angeles, is now in its 3rd year of hosting screenings, discussions, and events aimed at getting the general public more involved in urban planning.  There are two upcoming screenings in the Dallas area.

The screenings run parallel with the 23rd annual Congress for the New Urbanism in Dallas April 29 – May 2.  The congress is a four day-long event with lectures, discussions, and workshops for urban designers, architects and engineers.  CNU is one of the oldest and largest organizations advocating for walkable places and sustainable communities.  CNU will attract leading urban thinkers to Dallas.

The Film Festival is a great way for the general public to get involved in urban planning.  The films show key concepts of new urbanism in practice in cities around the world.  The Festival was founded by Josh Paget, a stand-up comedian and fan of New Urbanism.  “We’re excited to be coming to Dallas. Dallas has a lot of great urbanism being practiced at the large and local scale,“ said Paget.  “Hopefully the screenings will encourage and inspire more of that action.”

In Dallas, the New Urbanism Film Festival will host two different screenings with two different themes.  On Thursday at 2pm at LABART Gallery a screening of Tactical Urbanism Short Films, the films show small scale, urbanism projects performed by individuals to inspire mass change.  Friday at 7pm at Oak Cliff United Methodist Church, the films will highlight the role of the community in developing and sustaining a sense of place. 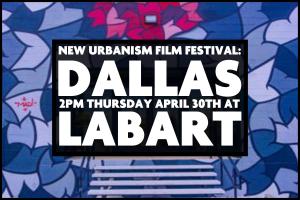